After undergoing interoral radiation therapy for my jaw, I was left with quite severe mouth sores and none of the conventional products (Biotene, Oragel, etc) worked to relieve the pain and discomfort.

Sandi kindly told me about Thieves, and, after some additional research, I came  with two different strategies that successfully healed the mouth sores and eased the discomfort.

Thank you Sandi! As someone who has always been a bit wary of naturopathic remedies, I was delighted to find that there was more to the wives tale of the power of Thieves to cure everything (including the plaque) than I’d initially given it credit for. 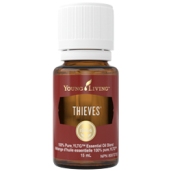 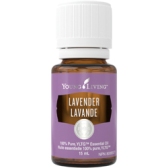 “Young Living has been such a blessing in my life.”

I have been on a wellness journey for some time and they have been such a powerful addition to my own and my family’s well-being.

My first real eye-opening aha moment was when I started using them for my severe ragweed allergy.

I honestly didn’t believe that it would work because I’ve suffered with terrible allergies to trees in spring and really bad ragweed allergy late summer until the first frost since I was 12 years old. But I thought what the heck do I have to lose? Within three days of diffusing lavender, my allergies symptoms all disappeared. It was amazing and as a skeptic I thought after a month maybe my body just healed itself.

How could an essential oil take away these years of suffering that the medical community couldn’t help me with?

So I stopped the oils and 3 days later I was suffering with all my symptoms again. I started diffusing lavender again and I didn’t need any more proof to know it works.

I’ve had five symptom-free springs, summers and falls since then.

That’s where it began. From there it just evolved and I started learning more by attending workshops connecting with our Pure Culture oil community.

Our family has never been healthier.

When I start to feel like I’ve might be getting something I have a whole protocol I go through which includes Thieves on my feet and diffusing. It works 99.9% of the time. If I do suffer with anything, it’s very mild.

My husband used to ask me to perform my “voodoo” on him whenever he started to feel like he might be getting something. I’ve taught him what to do and he just does it himself now!

A few years ago my daughter had a stubborn plantar’s wart that the doctors couldn’t get rid of tried to get rid of. She started putting a drop of Frankincense on the wart twice a day and on the tenth day, it was gone. It literally dug itself out and fell off!

I use lavender daily to sleep. Peppermint on the tip of my nose when I’m getting fatigued at work. Joy on my heart to prevent any seasonal depression, and since December I’ve been using Abundance blend daily with intentions and all these beautiful things are coming into my life.

I have many things I do for overall wellness. I’ve been in recovery for 21 years and I use the 12-step program. I connected with Strong Girls in September of 2018 to improve physical strengths and address my issues with healthy and balanced eating.

Such gratitude for what this healthy lifestyle change has given me and my family.

No More Colds or Flu

In July 2017, I was on the ship, The Aegean Odyssey, sailing to Iceland. On the first day, the captain came on the loudspeaker welcoming us all and reminding everyone to be sure to wash our hands often in order to keep everyone aboard healthy.  About the third day of the cruise, I heard some coughing and sneezing and went right to our cabin and got out the Thieves. From that day on, we applied a drop of Thieves to the bottom of our big toes morning and night. When I offered it to the people who were travelling with us, they dismissed it as impossibility that a drop morning and night of Thieves would keep them healthy. They all got the cold and flu. 99% of the ship got it – we didn’t!

One drop of Thieves on our big toes morning and night kept us healthy on a ship of sick folks!

I put Frankincense neat in a roller ball.

I rolled it on my skin tags morning and night.

Essential Oils absorbs into your skin in 20 seconds.

It took me about two weeks and they were gone.

I was commissioned to clear and paint a home last winter. As the property was in a rather remote location on a lake, I decided to make it a painting holiday and stay there for the week. It turned out to be a nightmare or at least a very bad movie. I am very sensitive to artificial scents; anything with chemicals in them. I could smell something but it was such a big house, I was challenged to place exactly where it was coming from.

I went to bed that night, exhausted from pushing myself to finish one huge room. When I woke up I had the worst migraine ever and my throat was coated.  I got up and went into the bathroom where lo and behold, there the culprit was, plugged into an outlet by the toilet. A Glade air freshener!

I believe they are all the same so I am not picking on Glade as being the worst. Maybe they have better advertising.

Anyway things went from bad to worse. My lungs started filling up and my head felt like it was going to explode. I had a deadline to get things done so I stubbornly continued.

When I was ready to go home, I had a full blown lung infection. I put RC and Thieves, which are part of the starter kit, into my diffuser in the bedroom for two nights. I also purchased some essential oil healing cream for my chest made by Sandi and rubbed it on every night for 2 nights. By the third night, my respiratory system had cleared and I was coughing all the infection up and out!

If it kept the plague away from the robbers, it will keep the cold and flu away from us! 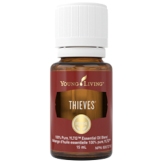 During the plague, the robbers who were stealing gold from the teeth of the dead and dying used a combination of Clove, Cinnamon Bark, Rosemary, Lemon and Eucalyptus. When they were caught, in order to get their sentences decreased, they gave up the recipe that had kept them healthy. Gary Young obtained the recipe and made Thieves Essential Oil. This combination kept the plague away from the robbers and can keep the flu and colds away from you and your family.

I was at a friend’s for Christmas and on Boxing Day, he decided it was time for the tree to go to the curb.

We began taking the decorations off the tree and packing them up.

Then came the big job – unscrewing the tree from its holder and hauling the tree out the door to the curb.

When I got home, I realized I had tree resin on the arm of my sweater. It was sticky and I tried to pick it off to no avail.

I knew that Young Living Lemon Essential Oil took off the stickiness left behind from adhesive on my body so I used it to see if it would take the sticky resin off my sweater.

I put a drop of lemon on the first bit of resin and was able to lift it right off my sweater. I did that with all the bits of resin on my sweater and it took them all off. Some I didn’t even need to pick off – it just dissolved! 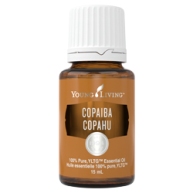 I was visiting a friend for a few days and we noticed that Felco, the family fur person, was scratching and flapping his ears a lot.

We determined that he had an ear infection. His ear was raw from scratching and it smelled like infection. My friend had just purchased the Young Living kit so I suggested Copiaba, which is one of the many major players in the starter kit. Sandi Shortt has been a wealth of information for me on the healing properties of the oils. Copiaba is used for inflammation and promotes healing.

Anyway, back to Felco. Linda put some of the oil on a Q-tip and tried to get close to Felco with it but he ran away and then just sat and looked at her from a distance. She looked at him and asked him if he wanted to smell it. She put a couple of drops on her finger and held it out to him. He came toward her, sniffed and then cocked his ear for her to apply it! I was really excited about that. Felco knew it was all natural!

The next day, after two applications, we had a happy dog. 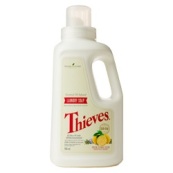 I was watching TV and drinking red wine. I didn’t realize I had dribbled some red wine on a lovely bright yellow sweater – my favourite, of course! When I finished the TV show and was getting ready for bed, I looked in the mirror and saw these 4 red wine stains on my sweater!! And, it had dried!

I got my Lemon Essential Oil and let drops of Lemon fall on the stains and blotted them with a towel. I did this several times until it seemed most of it was out. I put it in the washing machine with Thieves Laundry Soap and really hoped the stains would come totally out as I had been told. It worked!!!

When I got the sweater from the washing machine, it was totally clear of any stains. Thank you, Young Living, for saving me again!!